Black Friday is just hours away. The big sales, and the huge discounts are all locked and loaded. But for now, The Official Merchant Services Blog is going to take a moment to pause. The calm before the storm. We would like to wish everyone following our blog a very happy Thanksgiving holiday!

So while you’re getting ready to dine on turkey and trimmings, Host Merchant Services is going to offer you up some fun facts about Thanksgiving, its history, and the bird it centers on:

According to the National Turkey Foundation the U.S. raised a whopping 244 million turkeys in 2010. Of those birds, approximately 46 million found themselves roasting in ovens across the country last Thanksgiving. That number is on the rise in 2011. An estimated 248 million turkeys will be raised for slaughter in the U.S. this year, up 2 percent from 2010’s total, according to the U.S. Department of Agriculture’s National Agricultural Statistics Service.

National Geographic states: “Minnesota is the United States’ top turkey-producing state, followed by North Carolina, Arkansas, Missouri, Indiana, Virginia, and Indiana. These “big six” states produce two of every three U.S.-raised birds, according to data compiled by the U.S. Census Bureau. U.S. farmers will also produce 750 million pounds (340 million kilograms) of cranberries in 2011, which, like turkeys, are native to the Americas. The top producers are Wisconsin and Massachusetts.”

History of the Holiday

Though many competing claims exist, the most familiar story of the first Thanksgiving took place in Plymouth Colony, in present-day Massachusetts, in 1621. More than 200 years later, President Abraham Lincoln declared the final Thursday in November as a national day of thanksgiving. Congress finally made Thanksgiving Day an official national holiday in 1941. Sarah Josepha Hale, the enormously influential magazine editor and author waged a tireless campaign to make Thanksgiving a national holiday in the mid-19th century, and is often cited as having an impact on getting Lincoln to declare it a holiday. Hale was also the author of the classic nursery rhyme “Mary Had a Little Lamb.” 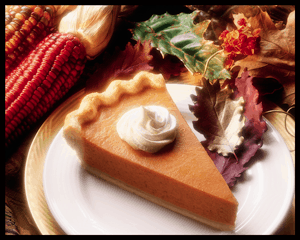 What Was On The Menu?

The traditional foods we tend to associate with Thanksgiving were most likely not part of the menu that day in Plymouth. The feast was organized by Governor William Bradford and attended by some 50 English colonists and about 90 Wampanoag American Indians. It lasted for three days and had some foods that might surprise you. That National Geographic article suggests that the Wampanoag killed five deer for the feast. And that the colonists shot wild fowl –– which could have been geese, ducks, or the turkey we all associate with the feast. And it is regarded that some forms of Indian corn dishes were also served. The article also suggests that the Indians supplemented the venison with fish, lobster, clams, nuts, and vegetable dishes like pumpkin, squash, carrots and peas.

The aforementioned National Geographic Article also suggests Plymouth wasn’t really the first Thanksgiving. It states that American Indian peoples, Europeans and other cultures around the world often celebrated the harvest season with feasts and gatherings, many of which gave thanks to higher powers for their survival and their sustenance. In 1541 Spaniard Francisco Vásquez de Coronado and his troops celebrated a “Thanksgiving” while searching for New World gold in what is now the Texas Panhandle. After that, a similar feast was held in 1564 by French Huguenot colonists in present-day Jacksonville, FL. English colonists and Abnaki Indians feasted together in Maine’s Kennebec River around 1607. And Jamestown, VA colony celebrated the arrival of a food supply ship that ended a brutal famine in 1610. 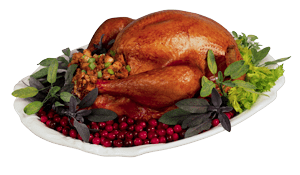 More Facts About the Holiday

So there you have it. A completely incomplete rundown on Thanksgiving and turkeys! Enjoy your meal and get ready for the big shopping blitz to begin at midnight. Black Friday is upon us and credit card processing, merchant services and e-commerce business is about to boom.