Today we’re going to take a flight of fancy with The Official Merchant Services Blog. It is Friday after all, and with a long holiday weekend about to start, we figure it’s just the perfect time to do something silly at the blog.

With the Avengers movie setting box office records, the mighty month of May has been an amazing improvement for the Merry Marvel Marching Society as the massive amounts of money multiply and their movie studio is magnified in the public eye! Excelsior!

So I was inspired to do an Avengers themed take on Merchant Services today. What sparked this inspiration was a combination of much of my recent writing on Mobile Payments, and the fact that I utilized Fandango’s Mobile Ticket app to purchase my own ticket for the big blockbuster. Apparently I wasn’t the only one to do this. According to this article at Techcrunch.com, the Avengers set a mobile sales record for Fandango. Fandango did not release the full data to Techcrunch, but the article notes that on Sunday of the opening weekend, Mobile Ticket sales accounted for 42 percent of all sales. This figure dwarfed the previous high for mobile penetration, The Vow, which had 26 percent of its opening weekend sales via Mobile Ticket.

So here’s this bristling new technology pushing Fandango’s e-commerce forward with the convenience and ease of mobile purchasing power, mixing itself into the biggest blockbuster film opening of all-time. And of course, I got to be a part of that. Toss in the offhanded fact that The Avengers is one of my all-time favorite comic books and I simply could not resist thinking … What If?

And the tagline to such a bold new universe goes a little something like this: “And there came a day, a day unlike any other, when Earth’s mightiest merchants found themselves united against a common threat. On that day, the Avengers Merchant Services were born — to fight the fees no single payment processor could withstand! Through the years, their rates have prospered, charging low fees, and their service has never been denied! Heed the call, then — for now, Merchant Services Assemble!”

Find that hard to visualize? We here at TOMS-Blog will do the visualization for you! First we have a fascinating infographic that breaks down the revenue generated by a payment processor if the Avengers Movie Box Office (as compiled by May 18) had been a Merchant Account’s May Transactions. Gaze in wonder at the nigh omnipotent processing power and infinite optimization of such a bold and titanic statement of payments: 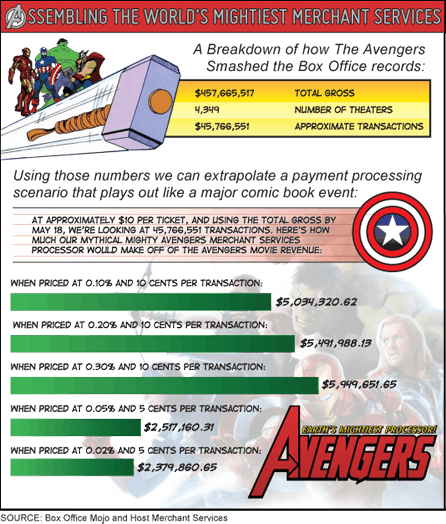 Those are some mighty revenues that could have been generated in our alternate earth, protected by our alternate Avengers. Debuting in 1963, the Avengers comic book became one of the cornerstone’s of the Marvel Universe crafted by Stan Lee and Jack Kirby. For generations the comic has wowed its readers with a roll call of the most popular and powerful heroes that the company publishes banding together to save the world from would-be conquerors and major disasters month after month after month. One of the key characteristics of the Avengers has been its revolving door style membership, with a large variety of heroes heeding the call and joining the team. The roster has changed so often throughout the years, including everyone from the re-discovered Captain America (which contrary to the film, was not an original member of the team), to Wolverine to Spider-Man. An odd statistic that reflects how inclusive the team’s membership can be is that over the years 3 of the 4 members of the Fantastic Four have been card carrying members of the Avengers. The sole exception was the Human Torch, but the original Human Torch (an android created in the late 1930s with no actual relation to the Fantastic Four member) was a member of the West Coast Team.

Assembling the Perfect Team of Services

With this in mind, I felt the best way to finish off our flight of fancy would be to craft the ultimate roster of services and products for Avengers Merchant Services, Earth’s Mightiest Processor! Who would make the cut? And what would they bring to the table?

There’s no better Avenger than Captain America. He’s the heart and soul of the team, and their recognized leader. An Avengers roster based on Merchant Services would have to include the aspects of Cap that make him the legend he is. Trust and Integrity would the core foundation. And superior customer service from the super soldier himself would be the end result of that trust and integrity.

For decades the Avengers existed on Tony Stark’s dime. The technological edge that Iron Man brought to the team helped put them one step ahead of their foes and prepared them for any threat they would have to face. He supplied their headquarters, their vehicles and their government security clearance. So any Merchant Services team based on the Avengers would need to include an Iron Man. With E-Commerce pushing the payment processing industry quickly into the future, Iron Man would keep his Merchant Services team ahead of the game in those areas. Iron Man would offer the latest in payment gateway support and e-commerce tech, assisting those in need with a complete e-commerce solution.

The Avengers always boasted the heaviest hitters in its roster, and because of that they could always take on the toughest foes and handle the largest threats. Thor and his enchanted hammer embody this aspect of the team. Its the basic, fundamental power that Thor brings to the table that makes the Avengers not just a global criminal deterrent, but as seen in many of the comics, a more cosmic level of deterrence. A Merchant Services team based on the Avengers would place the power of Thor squarely in its core payment processing area: Retail. Powerful processing solutions that included free equipment granting every potential customer the ability to swipe cards as often as Thor swung his hammer and took to the skies.

Simply put: The Hulk smashes! So an Avengers team assembled to bring the power of Merchant Services to the world would have its Hulk smash prices. The strongest pricing there is, smashing the high fees of all those who opposed the Avengers. The gamma-infused pricing model would obviously be an Interchange Plus plan. There’s no other choice more suited to the Hulk’s strength and determination.

Security, backup, and data protection are all key for running a safe Merchant Services operation. So any Avengers themed Merchant Services team worth its salt would need a member focused on security. Like the Black Widow, who would make it easy for the team’s merchants to stay up to date with PCI Compliance standards and have a plan in place for Data Breach Security protocols.

An Avengers team providing Merchant Services would need extensive resources at its fingertips. So Nick Fury, with the full backing of SHIELD would be an absolute requirement. Fury would provide a knowledge base, an active up to date feed of industry related information, and an archive of articles and resources specifically tailored to educating and supporting a Mighty Merchant Services team assembled to Avenge the downtrodden.

The Avengers have long relied on members like Hawkeye to help the team stay on target. The sharp eyed and sharper witted archer has always helped the team stay grounded and flexible in its ability to tackle both big and small adventures. A Merchant Services team assembled to fit the model of the Avengers lineup would need a Hawkeye among its ranks that allowed it to offer extremely flexible and viable customization. Hawkeye lets the team find the right suite of services for each individual merchant it helps.

Face front true believers! A blueprint for an Avengers themed Merchant Services team. A team assembled to combat the tricky foes and villains of the industry that sucker merchants in with gifts and promises of savings but actually tie them down to long term contracts rife with hidden fees and surcharges and penalties. The Avengers Merchant Services team is assembled to provide trust and clarity in this parallel payment processing industry. It’s not much of a surprise to this scribe, however, that the entire roster is comprised of features found here, in this world, on this earth. Each team member reflects some amazing aspect of Host Merchant Services. A super powered formula that merchants seeking payment processing solutions can already find right here!