The Official Merchant Services Blog has late breaking news to report today. Once again we take on the topic of the Stop Online Piracy Act (SOPA). In perhaps the strangest twist to date for the ongoing saga that is the battle between the entertainment industry to curb piracy and the internet industry to keep their business free of government interference on a micromanaged level — Alex Fitzpatrick from mashable.com reports that SOPA has some SOPA issues.

In Fitzpatrick’s article, found here, it is noted that the sponsor of the Stop Online Piracy Act (H.R. 3261) Lamar Smith has a copyright violation on his own website texansforlamarsmith.com.

The article follows a report from Jamie Lee Curtis Taete over at www.vice.com. Taete investigated Lamar Smith’s website for any potential copyright issues. You can see Taete’s investigation here. Taete describes describes the impetus for the investigation: “US Congressman and poor-toupee-colour-chooser Lamar Smith is the guy who authored the Stop Online Piracy Act. SOPA, as I’m sure you know, is the shady bill that will introduce way harsher penalties for companies and individuals caught violating copyright online (including making the unauthorised streaming of copyrighted content a crime which you could actually go to jail for). If the bill passes, it will destroy the internet and, ultimately, turn the world into Mad Max (for more info, go here).

I decided to check that everything on Lamar’s official campaign website was copyright-cleared and above board. Lamar is using several stock images on his site, two of which I tracked back to the same photographic agency. I contacted the agency to make sure he was paying to use them, but was told that it’s very difficult for them to actually check to see if someone has permission to use their images. (Great news, copyright violators!) However, seeing as they’re both from the same agency and are unwatermarked, it seems fairly likely that he is the only person on the entire internet who is actually paying to use a stock image (and he’d be an idiot not to).

So I took a look back at an archived, pre-SOPA version of his site.”

The violation stems from Lamar Smith using this image: 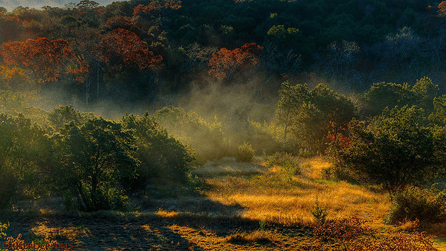 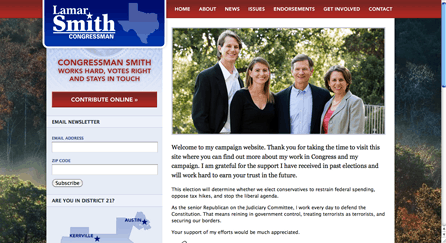 Taete fills in the full details of this violation: “I managed to track that picture back to DJ Schulte, the photographer who took it.

And whaddya know? Looks like someone forgot to credit him.

I contacted DJ, to find out if Lamar had asked permission to use the image and he told me that he had no record of Lamar, or anyone from his organization, requesting permission to use it: ‘I switched my images from traditional copyright protection to be protected under the Creative Commons license a few years ago, which simply states that they can use my images as long as they attribute the image to me and do not use it for commercial purposes.

‘I do not see anywhere on the screen capture that you have provided that the image was attributed to the source (me). So my conclusion would be that Lamar Smith’s organisation did improperly use my image. So according to the SOPA bill, should it pass, maybe I could petition the court to take action against www.texansforlamarsmith.com.’

Oh dear. Luckily for DJ, there are people out there like Lamar making new laws to protect the little guy against online copyright theft. Keep fighting that good fight, Lamar!”

No spokespeople from Lamar Smith have been available for comment on this issue. Maybe when the egg on their faces is removed there’ll be time to address the silliness that stems from the SOPA sponsor not taking enough time to make sure his own site didn’t fall under the extremely broad language that would allow the Department of Justice to shut down his own site.

Luckily for Smith, the bill hasn’t been signed into law just yet, so Google doesn’t have to remove his site from their search engine, and his payment network provider doesn’t have to suspend transactions from the donation portion of his site.

To find out more about the Stop Online Piracy Act, you can read the in-depth Host Merchant Services Analysis here.

To read the proposed legislation itself, you can download it here.