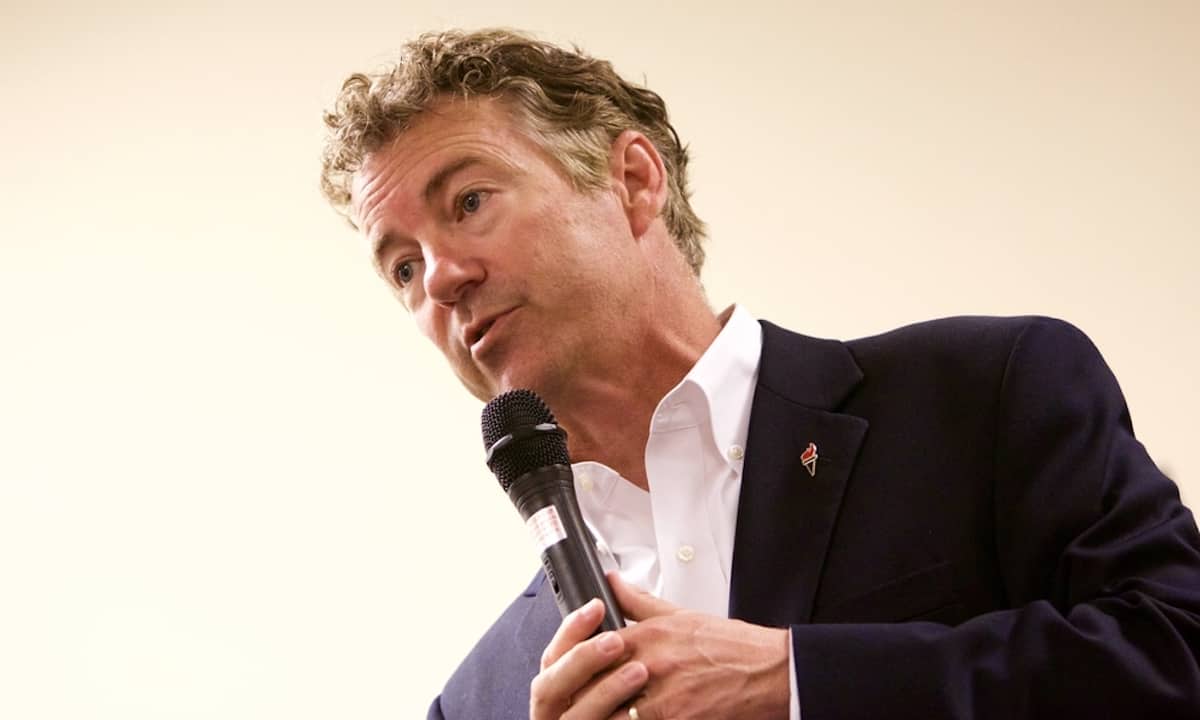 Rand Paul, a US Senator from Kentucky, is questioning if Bitcoin, which is gaining in popularity, has the potential to overtake the dollar as the world’s reserve currency in the future.

During an interview on HBO’s “Axios” Paul said, “I’ve begun to wonder whether or not bitcoin may become the preferred reserve currency for the world.” As people worldwide lose confidence in governments, he stated that the prospects for such a move had become plausible.

During his presidential campaign in 2015, Paul, made news when he revealed his campaign would take bitcoin payments. Paul also stated that cryptocurrency had developed beyond what he could have imagined when he first started out.

As a result of its expansion, “I’ve been impressed by it, and I’ve always been a believer that our money should be supported by something of worth, whether it’s precious metals or commodities.” Nevertheless, Paul feels that “government currencies can be very untrustworthy, since they’re fiat currencies, which means that they’re have nothing backing them. ” Because the US dollar historically has been more stable than the currencies of other countries, it has become the world’s  reserve currency.”

Upon being asked about the unlawful use of cryptocurrency and whether the industry should be subjected to tighter regulation, he alluded to the government’s control of private financial institutions. His main concern right now is “government prying into private bank accounts, no matter if they are cryptocurrency or a traditional bank deposit account.”

Is it possible that rising levels of consumer debt may lead to higher adoption of Bitcoin?

Consumers are becoming overloaded with debt in increasing numbers all across the world, according to alarming warning signals. During 2017, household debt in the United Kingdom reached thresholds not touched since the 1980’s. Disparity between expenditure and income-led in households in the United Kingdom incurring an additional £ 25 billion in debt for the year 2017. That amounts to around twenty-five percent of the total amount spent by the government on its public health service.

The US and the UK aren’t the only countries that have experienced this. Consumer debt levels are rapidly increasing in almost every country, and this trend is expected to continue. Debt is effectively the act of taking future cash flows (revenue) and spending in the present. Consumer credit-fueled growth will not be able to be sustained indefinitely, and the debt will have to be re-paid in the future.

What is the relationship between this and cryptocurrency adoption? Some economists think governments around the world should stimulate growth by supporting demand for consumer goods and services. Consumer debt statistics for the world reveal that lower interest rates encourage consumers to take on increasing sums of debt, which has resulted in artificially boosted demand. This manufactured demand has been a driving force behind economic expansion over the previous ten years.

On the other hand, interest rates are starting to increase again over the world, and debt levels have already reached record highs. What exactly does this imply? In other words, when consumers pay down their loans, their free income usually declines as well. It is normally during this stage of the cycle that the economy enters a recession, and that’s dire news for businesses, as well as for housing in general.

As a result, the question arises as to which assets normally account for most of a person’s overall worth. Stocks, housing, and retirement accounts are the most common investments, which are often made on the stock market. The value of all of these assets often declines during an economic downturn. So, are people going to passively watch their net worth decline? Alternatively, will they seek assets to hedge their bets and make an effort to safeguard their net worth? It is precisely in this situation that the vast majority of individuals will look for an item that can be used a value store. Increasing investments and higher adoption should be positive for Bitcoin if it is truly digital gold, and this should be the case in these economic conditions.

How many countries are adopting bitcoin, and which ones are leading the charge?

It should come as no surprise that the US has the greatest activity in Bitcoin trading – after all, it is the world’s richest country. Bitcoin acceptance in industrialized countries such as the US and the UK has been fueled mostly by speculative activity. But then, why did Venezuela rank fourth in trading volume statistics for the month of June 2018?

Venezuelais currently suffering from the greatest rate of inflation on the globe. According to the International Monetary Fund, Venezuelan inflation reached 1 million percent in 2018. Citizens of Venezuela can no longer rely on the government and their banking institutions to protect their power of purchasing, as has been demonstrated repeatedly. In Venezuela, we are witnessing the exact opposite of what should happen when individuals lose confidence in their country’s currency: hyperinflation. Citizens who are paid in local currency attempt to exchange it for something else immediately after receiving their pay check. Data suggests that many Venezuelans are exchanging their cash for Bitcoin, according to the available information.

One particularly noteworthy development is that use of Bitcoin appears to be expanding in other nations as well, such as Argentina, which has much less severe economic problems.

What is it about Bitcoin that has people going to it during periods of economic crisis?

Fiat currency gets its worth through the belief held by the population of a nation that the currency in question actually has worth. It is not uncommon for this faith to be destroyed during periods of economic distress. What makes matters worse is that when the economy is struggling, governments are more likely to apply harsh capital controls in an attempt to keep their currency from collapsing.

Citizens, understandably, begin to lose confidence in their currency, system of government, and banking institutions. Most people would be less inclined to put their trust in a bank if they limited withdrawals to a maximum of $1 per day? Venezuela experienced a situation similar to this. With Greece, the situation was perhaps even more severe, with € 1.6 billion being taken directly from residents’ bank accounts to assist in the repayment of state debt.

Bitcoin is a digital currency that can be an alternative for fiat money, however it is extremely volatile. The upper limit on the supply Bitcoins, 21 million to be exact, means that it cannot be artificially inflated. On the other hand, fiat currencies have an  infinite supply, they are theoretically limitless in number.

The result is that citizens must have confidence in their government banking and finance institutions in order for them to maintain their power of purchasing. As a result of the loss of confidence, some people are now preferring to put their trust in Bitcoin. Given the fact that Bitcoin is not centrally controlled, this makes a great deal of sense. Arbitrary controls cannot be implemented on Bitcoin transactions, and the cryptocurrency can be easily transferred between countries.