The cashless paradigm has gone from credit and debit cards to smartphones, and the next logical step appears to be wearable devices such as smartwatches and fitness trackers; however, it should be noted that wearable digital payment systems do not necessarily need to be part of smart devices. In early 2017, market research firm Tractica issued a forecast that suggested more than $500 billion worth of wearable retail transactions will be made in the year 2020; nonetheless, a more recent estimate by MasterCard Europe revises this projection closer to a billion dollars. 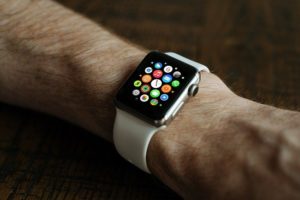 is at the heart of this wearable digital wallet revolution, which is powered by Radio-Frequency Identification (RFID) and Near-Field Communications (NFC). These solutions are not exactly new; in the United States, RFID key fobs were marketed to drivers about a decade ago for the purpose of facilitating the process of paying for fuel purchases right at the pump. NFC payments were initially designed almost exclusively for smartphone, but smart wearable devices such as the Apple Watch, which links with the iPhone and the iPad, are making more sense as digital wallets.

MasterCard has a good reason to follow the wearable payments segment; the debit and credit card giant has a good opportunity to catch up to its rival visa in terms of global market share through wearable devices, which are not limited to smartwatches. Consumers who do not particularly care for smartwatches and prefer more traditional analog and digital versions can get watch straps equipped with contact-less payment technology, and MasterCard wants to be the primary processor in this regard. The company started working with luxury watchmakers in Sweden and Switzerland about a year ago, but MasterCard has recently struck partnerships with manufacturers of aftermarket watch straps to give more consumers the ability to pay with accessories they wear.

Mobile point-of-sale transactions are taking hold in Asia and Europe more so than in North America. At European brick-and-mortar stores, 61% of transactions are already contact-less, and about 16% are made with wearable devices. One aspect of wearable devices that is resonating with consumers is that many of them coming on the market are of the passive kind, which means that they do not rely on smartphone batteries to operate; this technology has been around since the key fob days, and it is regaining interest as an alternative to mobile devices such as smartwatches and smartphones, which only allow digital wallet transactions as long as their batteries will last.