Yesterday, The Official Merchant Services Blog defined the term Mobile Payment Processing for its readers. We bring this topic up frequently because it’s one of the hottest trends in credit card processing. Today we’re going to update our coverage of the topic. We have been framing almost every discussion of the topic around a set of studies done last year.

The Mark of SORO

According to The State of Online Retailing Volume 1: Mobile Marketing, 91% of retailers have a mobile strategy in place. Produced annually in partnership between Shop.org and Forrester Research, The State of Retailing Online (SORO) study is the highly anticipated research that brings details of all aspects of eCommerce — from marketing, social media and mobile to KPIs, mobile and profitability — to the online retail community. For the first of two 2012 studies, Shop.org, RAMA and Forrester Research have embarked on a “deep dive” study of all things mobile marketing. Its findings are based on survey responses from 59 retailers, including merchants that operate stores, sell only on the web and manufacturers selling directly to consumers and details how retailers are implementing smartphone and tablet marketing into their sales mix. 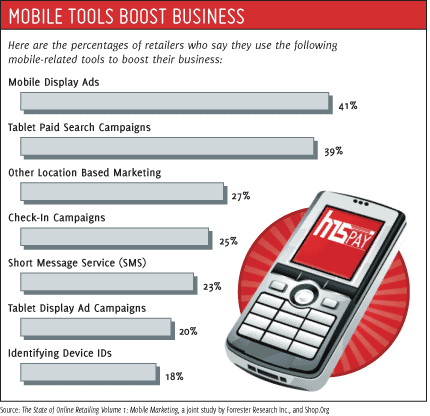 Essentially the data in the study indicates that e-commerce is slowly but steadily integrating more and more aspects of mobile commerce. The driving force spurring much of the conversion along appears to be coming from social media and e-mail campaigns. Mid-sized retailers — those with annual sales between $10 million and $100 million — say mobile e-mail optimization is their top tool for mobile marketing.

Also the study revealed the popularity of Quick Response Codes. The study says small and large retailers — those with annual sales of less than $10 million or more than $100 million, respectively — cite their use of quick-response codes or other barcode scanning tools as the top tool they use for mobile marketing, even though only 15% of smartphone users say they’ve ever scanned a code, the report says.

The information about QR Codes is significant when you factor in two of the latest breaking news stories in the mobile payments processing category.

First, Burger King just announced it has partnered with Qualcomm’s mobile commerce arm, Firethorn Mobile, for the BK Mobile Crown Card (BK MCC) initiative, which will start in 50 restaurants across Utah and surrounding areas. The platform will allow Android and iOS smartphone users to scan QR codes found on in-store counters and drive-thrus to make a payment via the BK MCC app, which is available on Google Play and the App Store. The transaction will then be processed through the user’s registered debit or credit card account. 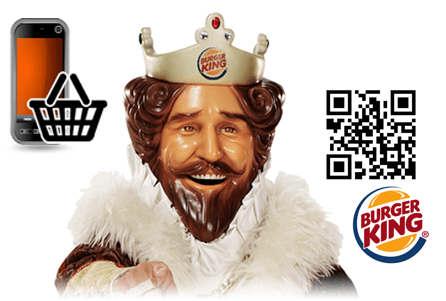 Here’s how the process works:

According NCR management, the entire process takes about ten seconds to complete. In addition, someone waiting in line at an ATM could hypothetically run through all the first steps on the smartphone and would be ready to scan the QR code immediately when they reached the front of the line.