Today The Official Merchant Services Blog offers a really quick update on the fallout from The Durbin Amendment. You’ll recall Host Merchant Services offered a thorough analysis of the legislation before it took effect.

Much of the current media coverage for this topic revolves around something we predicted in that analysis: “The banks, not wanting to take a $9 to $10 billion dollar loss in revenues for the year, will simply add fees to other payment options or get rid of premiums and extras that they had been offering.” We also stated: “Higher fees on checking accounts and the removal of debit card rewards programs were suggested as a response banks would have.”

This article from twincities.com reports pretty much what we’ve been reporting about the response banks are having with the Durbin Amendment. The article, dubbing this strategy as Bank Fees 2.0, states: “Three months after banks scrapped plans for debit card fees, it’s becoming clearer how they intend to recoup money lost in the Dodd-Frank financial reform law. Instead of one new fee, prepare to be sold more products, offered new service packages, lose debit rewards and face more fees in general.”

This creditcards.org article reports the same: “So [the banks] enter 2012 chastened … and still facing a revenue gap. How are they going to make it up?  In fees, of course!  Just not the fees you were expecting. The Bank of America mess taught them a lesson; trying to unilaterally slap all their customers with a new fee is going to end badly, especially in the current climate, where the man on the street is hopping mad about big bank behavior.  So instead, they’re going to be sneaky about it.”

The article then offers a checklist of fees that could be forthcoming.

And then finally The Baltimore Sun offered this article which states that banks plan to add a wide variety of fees to help offset the losses from the Durbin Amendment. The article states “There are nearly 50 different fees consumers can wind up paying, depending on the services they use and how they use them, according to some consumer advocates’ latest estimates.” The article then quotes Alex Matjanec, co-founder of MyBankTracker.com, a consumer-finance information website describing the fees, “Most of these fees are not the in-your-face charges, such as the debit-card fee that caused the big uproar. Many are flying under the radar. But they could have a big long-term effect on your money if you aren’t paying attention.”

The sneaky fees were something we covered in The Official Merchant Services Blog entry on November 16, 2011: “Banks are now going ninja style with their plan of action. Sneaky fees hidden and peppered about their services. All combining to help make up the ground they were going to lose. But most of them deposited around their whole suite of services that it is much harder to latch on like a pit bull and berate them for doing this.”

The losses that banks need to make up are starting to come in and be reported. It was predicted they would be in the billions, and the latest analysis of fourth quarter earnings reports state that right now it’s about $6 billion in loss. The two largest banks handling these types of transactions — Bank of America and Wells Fargo — equal roughly $800 million of that loss. Here is an infographic breaking down the four biggest banks and their fourth quarter losses from the Durbin Amendment cap: 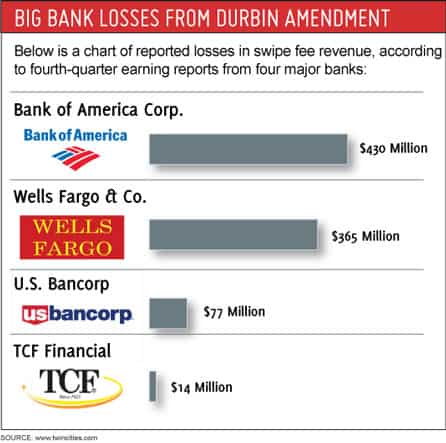