Today The Official Merchant Services Blog dives right back into the fire with the Stop Online Piracy Act (SOPA). We were kind of surprised to find out what this PC World Article had to say. Apparently the  music industry is doing pretty good despite the issue of online piracy upon which SOPA hinges.

SOPA was shelved by Congress more than ten days ago, as we reported in our January 20 blog, but the lobby that fueled the bill is still pushing for federal government involvement in online piracy. In fact, much of the content of SOPA that caused the controversy has popped back up on a wishlist from the International Federation of the Phonographic Industry (IFPI) regarding what they think needs to be done to fight online piracy. The IFPI is a global group similar to the U.S.-based Record Industry Association of America (RIAA).

To recap what SOPA was about you can review our initial post about it from our November 20, 2011 blog. The Official Merchant Services Blog was out in front of this story and eventually the rest of the medial caught up with the impact that this House of Representatives bill and its twin in the Senate — the Protect Intellectual Property Act (PIPA) — were going to have on a variety of tech industry sectors, including Payment Network Providers. Host Merchant Services provides an in-depth analysis of SOPA here.

You can also download a PDF of the bill here. 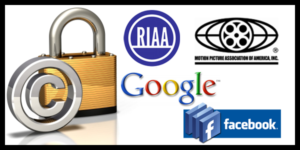 The Kids are All Right

According to the RIAA the music industry is outperforming other entertainment sectors in terms of digital sales. Jonathan Lamy, senior VP of Communications for the RIAA, tweeted that paid subscription services rose 65 percent to 13.4 million in 2011. This tweet was in response to figures released by the IFPI which Lamy was excited to read. Lamy also tweeted that paid digital music services are active in 58 countries, generating $5.2 billion in revenues.

Jumping into the tweets was another RIAA executive, Cara Duckworth. The VP of Communications for the RIAA also cited the IFPI figures and then said: “W/more than half of all music sales coming from digital services, we know how Internet works. “Music=Innovation. Declare THAT. #CES #SOPA.”

Throwing down the gauntlet, the RIAA is now essentially claiming that they have a viable working digital sales model that can exist on the internet. And yet still they pursue a lobby to crack down on piracy, and collateral damage that includes the internet and e-commerce.

Here’s a graphic detailing the top sales from 2011 according to the IFPI: 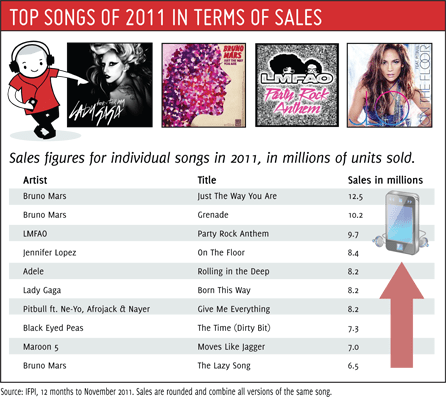 The IFPI put out this PDF which details a very hardline stance on how to deal with Online Piracy. Perhaps the most entertaining aspect of this wishlist is that it essentially repeats the details of SOPA. According to the PCWorld article IFPI chief executive Frances Moore said record companies are building a business in digital music “in spite of the environment in which they operate, not because of it.”

Moore went on to say record companies are working with ISPs, search engines, governments, and law-enforcement agencies to reduce the number of illegal downloads and ensure that an ever-higher percentage of the music that is downloaded is bought legally. “Our digital revenues, at one-third of industry income (and now more than 50 per cent in the US), substantially surpass those of other creative industries, such as films, books and newspapers.”

So the IFPI establishes with facts and figures that the music industry is doing well on the internet. Digital Music services are getting traction, profits are rising and piracy is being challenged. The RIAA finds all of this so amazing and awesome that they go and re-tweet it to the world.

With all of this good stuff being said about digital music sales, why does the IFPI have a wishlist of demands to fight piracy that seem pretty much like the exact same thing SOPA wrote?

This arstechnica.com article goes into detail about the demands the IFPI has. The demands can be broken down to seven key elements:

Where to go From Here?

It just seems tiresome that after all that went down with SOPA, PIPA, the internet blackout, and the controversy, the music industry just reloads and reuses the same exact talking points that got the laws killed in the first place. SOPA died because the things being asked for weren’t going to work. Banking on payment processors to police the internet was a bad idea. It still is a bad idea. This whole wishlist smacks of some old sitcom gag where a child asks one parent for a cookie, is told no, then goes and asks the other parent. The answer’s still no.

Payment Network Providers do not support online piracy. But the demands being given to them have loopholes where the Processor is being asked to shut down customers that are legitimate and not pirates, just on the whim of the entertainment industry.

And the real kick in the pants with all of this? At the exact same time the music industry makes this zealous push to continue to ask for wide open and ineffective legislation, they spend time gloating about how well they’re doing on the internet with legal, and apparently very profitable, digital transactions. All of course run through e-commerce sites supported by the same payment processors they are asking to shut down other customers at their fancy.

The bottom line is if Lady Gaga and Pitbull online sales are robust and  legit, it’s probably time to back off the Online Piracy rhetoric.