E-Commerce is getting rather commonplace these days. Shopping online is becoming ingrained in our life and part of our culture. And this opens up many opportunities for payment processing firms such as Host Merchant Services. Trailing behind the public’s general acceptance of shopping for stuff online and having it delivered to their doorstep is the idea of shopping for virtual stuff online and having it available for consumption only online.

Most people can easily relate to the idea of using the internet and your credit card to purchase a book you find online and having it shipped directly to your doorstep. But it’s taken longer for people to really get used to the idea of using your credit card online to purchase a sparkly sword for the character you use in a video game to equip. These items are commonly called virtual goods – non-physical objects purchased for use in online video games or online communities. These types of payments are referred to as microtransactions.

This practice is about to get a real kick in the pants from Blizzard Inc., maker of the largest Massively Multiplayer Online Role Playing Game in the industry, World of Warcraft. 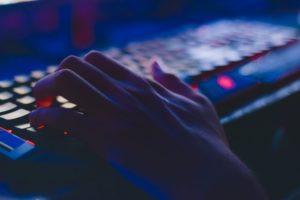 Blizzard announced that its newest game in development, Diablo III, is going to feature an auction house where players can purchase items from other players with either the game’s native currency or the players’ real life hard earned dollars.

Blizzard states on its website for the game, “The upcoming Diablo III beta test will introduce a treasure trove of exciting new features, including a new Auction House that will provide a powerful new way for your characters to acquire the implements of war.”

This move is a pretty big step forward for a company that heads up the largest MMORPG and has for years basically been caught between an official policy of not supporting the practice and an unofficial policy of facilitating that type of practice.

“We’re introducing a powerful auction house system that will provide a safe, fun, and easy-to-use way for players to buy and sell the loot they obtain in the game,” says the company on the Diablo III beta testing website. ” Items can be sold and purchased using real-world money or in-game gold.”

Now granted, this move is not for their primary game, the one that has millions of subscribers and dominates the genre of MMO games. But most people see this move with the new Diablo as a testing ground for a change that, if successful, could easily be transplanted to their larger game.

And it’s a major shift in the long-standing philosophy that the practice of real life cash for in-game gold is taboo and frowned upon. When this type of activity first sprang up, players treated it like cheating. Its practice, though definitely thriving, was kept to back channels and not openly discussed very often. And the online communities that sprang up around these games would consistently speak out against the practice … while the entire time secretly fueling a growing e-commerce business that was absolutely thriving.

Spending real life money for video game currency or video game items has been the backbone of online gaming for years now, no matter how taboo the practice seemed out in the open. That’s why even though Blizzard’s official terms of service states the practice isn’t allowed, many millions of subscribers to their game are part of the microtransactions industry. They’ve been selling in-game gold for customers’ real life money for years now. And people who play those kinds of games have been buying, in bulk, the entire time the company has officially been against the practice.

And now, it seems that company, the leader in that particular genre of game, is readjusting their outlook. And that brings with it some serious potential in the world of e-commerce.

There’s been a lot of talk regarding e-commerce’s growth predictions for the next four years. With Blizzard making this move to legitimize this business practice that was already thriving in the player to player interactions of their game, it opens up better opportunities for payment processors.

Before, the player to player transactions had a lot of risk of fraud attached to them. The transactions were made unofficially, and unsupported by the game company. They happened between players. The basics of how it worked would be you would submit an online payment, typically through PayPal, to a specific e-mail address. And in that payment’s information box you would provide your in-game character’s name and you would wait. And if this transaction worked, you would be contacted in-game by a person who would hand you the gold or items you purchased in the game. And if you were unsuccessful, you would not hear from anyone at all.

What Blizzard does with this auction house is it legitimizes this practice. Blizzard adds security and safety to the transactions, since they now have to offer some form of recompense if things go wrong. And then Blizzard gets its cut. Just like in the real world with interchange fees being in place to help cover the costs of security for swipe transactions, this setup prompts the company to take responsibility for the security of the player to player transaction. And thus, they get a fee for each transaction.

And the e-commerce opportunities being opened up are that each of these transactions do involve real life money. So the fees for processing them are stacked on top of the fees that take place in the virtual world.

With Blizzard taking this step, and bringing “real life cash for virtual gold” transactions into the spotlight, many other companies that make these kinds of games can now follow along with the trend and add more and more options to payment processing companies trying to stay on the cutting edge of e-commerce solutions. The stigma for these types of transactions seems to be shifting. No longer are people adamantly standing up against the idea of microtransactions and claiming the customers who purchase these items and this currency are cheating. Instead, the business is being embraced by the companies who make these games and they are finding ways to make profit from the industry that’s been thriving for years.

Here’s a very interesting article discussing the system Blizzard is using for Diablo III in the context of how it could easily be used in World of Warcraft.

And from the perspective of Online Payment Processors like Host Merchant Services, this move by Blizzard could start to open up the rest of the micropayment and microtransaction industry to more competition between processors. Legitimizing the practice takes it away from the third party black market and puts the business in the spotlight, allowing processors to vie for the added business opportunities.