Durbin Amendment About To Be In Effect

On the last day of September, Durbin Amendment Eve if you will, The Official Merchant Services Blog is about ready to end its Countdown to Durbin Series. Today we take a look at the big news that has the media buzzing.

Bank of America Reacts to Durbin

Bank of America, the largest bank in the country going by deposits, announced it is going to begin charging its customers a $5 monthly fee to use debit cards. The bank will begin charging the fee next year for the bank’s basic checking accounts. It will apply only to debit card purchases and not to ATM withdrawals, online bill payments or mobile phone transfers, the company said.

Consumer Backlash and Cut Up Cards

Bank of America announced this change, which will take effect for its customers in 2012, and were soundly slammed with negative feedback. Our first link comes from Fox Business Network, where Gerri Willis cut up her debit card on the air in reaction to the news from Bank of America. “Right here, right now, I’m going to show Bank of America what I think of their fees,” she said before using a pair of scissors on her card.

Our next link comes from The Washington Post. It picks up the topic, mentioning what Willis did on the air. It then offers Bank of America’s defense of this new fee, stating that the bank is doing this to recoup losses that will come from the cap on debit card swipe fees that the Durbin Amendment will put into place tomorrow on October 1. Then the article quotes Senator Dick Durbin: “Bank of America is trying to find new ways to pad their profits by sticking it to its customers,” Durbin said in a statement Thursday. “It’s overt, unfair, and I hope their customers have the final say.”

Bank of America Already in Crisis

While this move was quite predictable, and falls into line with Host Merchant Services’ previously published analysis of how banks will react to the Durbin Amendment, the news is quite incendiary because of Bank of America’s current situation. Which is mentioned in the third article we highlight on Bank of America, by Fox News: “the Bank of America decision drew outrage for several reasons. The company is the largest U.S. bank by deposits. And it reaped $45 billion in federal bailout money — receiving the first chunk in 2008 and the rest in 2009 to cope with losses at Merrill Lynch. “

The article also mentions that Bank of America did pay back the government all of the bailout money.

Bank of America a Microcosm of Durbin’s Impact

A fourth article, from the Christian Science Monitor, sums up quite succinctly how this news is quite standard Durbin Amendment fallout: “So in other words, Bank of America is shifting a part of the fee obligation from merchants to customers.”

As we’ve seen in the ongoing Countdown to Durbin series, this is one of the most expected moves that banks are making. Shifting the burden of the fees away from merchants and putting it squarely on the shoulders of the consumers. This avoids the scope of the Durbin Amendment’s regulations and lets the banks continue to reap profits from the billion dollar payment processing industry.

Rounding out the coverage of Bank of America and its announced monthly debit fees we find:

The Chicago Tribune offers a quick glance at Bank of America’s plan here.

The Baltimore Sun blogs to its readers to avoid these types of fees by switching to ATM only.

And the final little tidbit we offer you today on the eve of Durbin enactment comes from The Street, reporting that Morgan Stanley cut 2012 earnings estimates for Bank of America and 11 other banks. 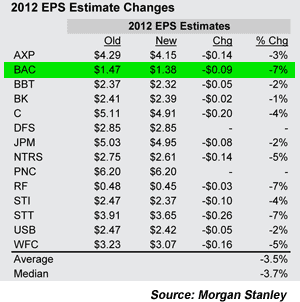 This chart, while the story states is not entirely tied to Bank of America’s recent announcement or to the Durbin Amendment, does show that banks will be affected by the Durbin Amendment. They will have to make changes to deal with the losses they expect to take from a hard cap on fees that they were profiting from, and if Bank of America is any indicator, the burden of those changes will go from the merchants who used to get hit with the swipe fees to the consumer who will now have to pay more to support the use of debit cards.